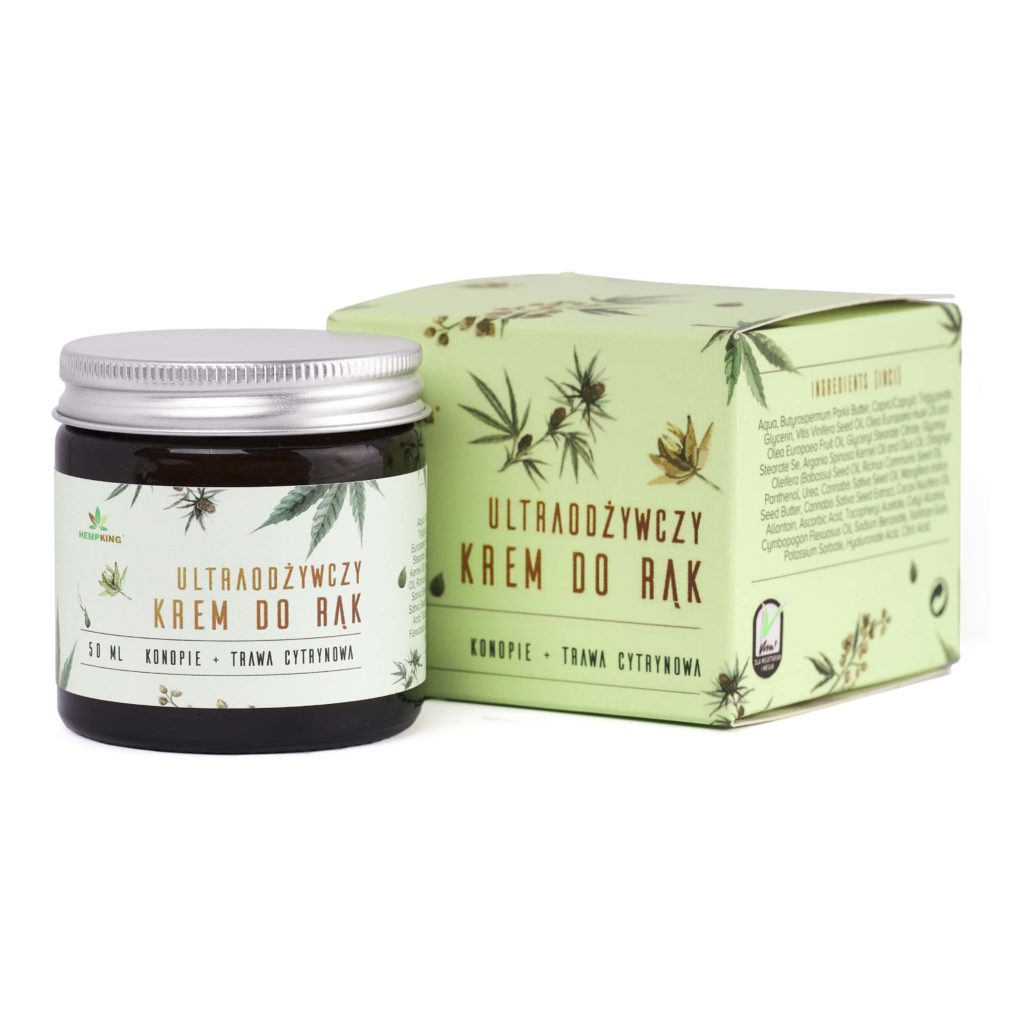 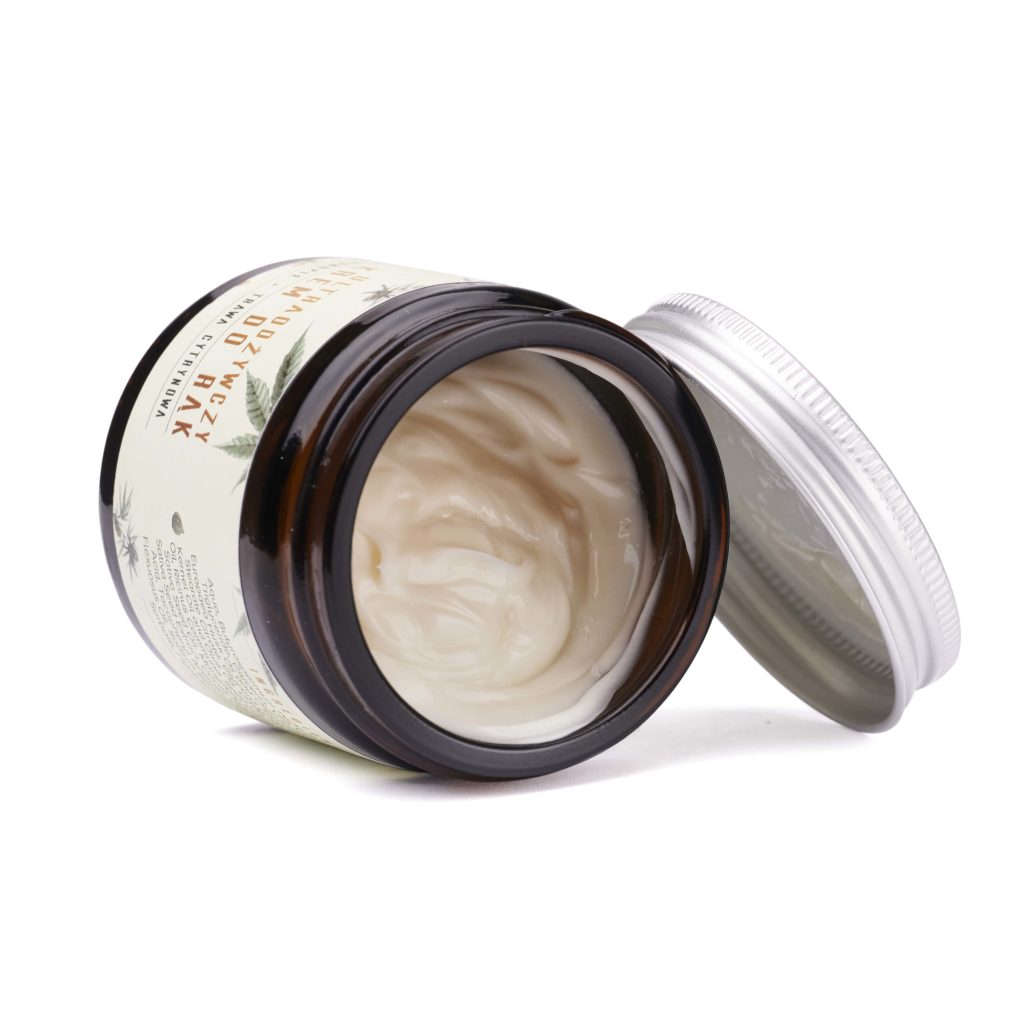 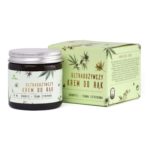 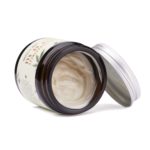 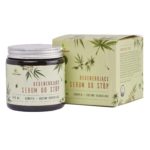 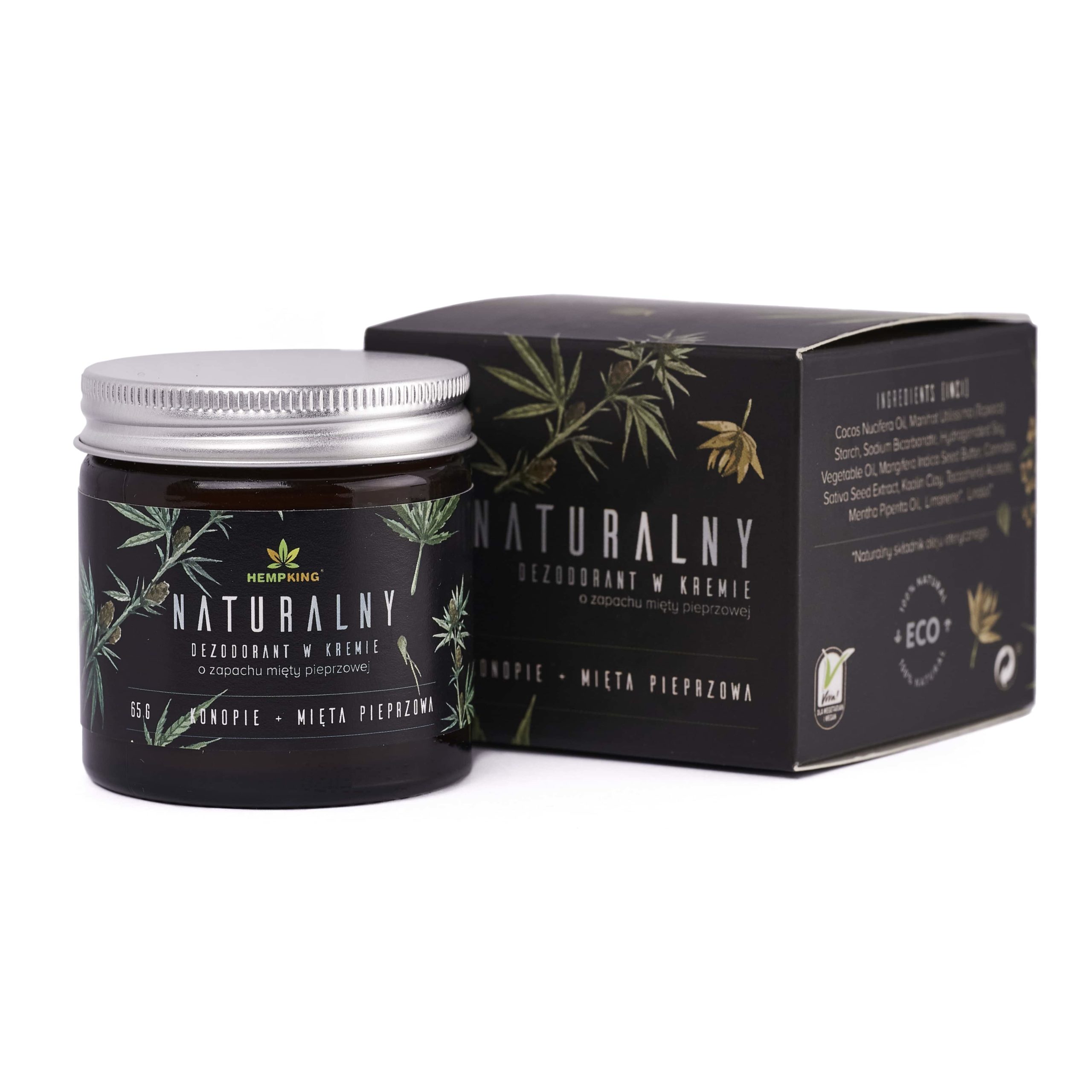 Natural Hemp Deodorant for Men with CBD and Peppermint
0 out of 5
( There are no reviews yet. )

Your hands are extremely important – they are your crucial asset. You shake hands when you greet somebody, use them to point at something, gesture and touch something or someone. Without them, it would be impossible to perform most of the daily duties. Your hands are exposed to chemicals, washing and disinfecting agents, as well as to weather conditions. They can change with time. Your hands need care that will give them everything they need. Our Hand Cream with Lemongrass Scent has been created primarily out of love for you and to promote the beauty of your hands. This Hemp Hand Cream is like invisible, natural gloves that protect the skin, nails and cuticles. At the same time, in addition to their protective function, they have nourishing, regenerative and soothing properties.
The composition of our Hand Cream with CBD is an effective blend of emollients as well as moisturising and nourishing ingredients. Unrefined butter and oils, such as shea butter, babassu oil and hemp oil, are just the beginning of a unique list of ingredients. Our nourishing Hand Cream with CBD has been enriched with our flagship ingredient, namely CBD! Hemp oil conditions, nourishes and regenerates the skin and has an anti-allergenic effect. A rich, yet light and well absorbable texture, will embrace your hands. It will be highly rewarding to see them look beautiful.

Especially for you, we have developed the second fragrance version of our Hand Cream with CBD – Vanilla&Orange with a wonderful, sweet and fresh aroma.

Butyrospermum Parkii Butter – Shea Butter. A natural ingredient derived from the African shea tree. It is one of the most popular and most common natural emollients in the range of cosmetics with replenishing effect. Shea butter is used in many areas of care, because it leaves a protective film. It also adds shine and nourishes your hair and nails.

Caprylic/Capric Triglyceride. Obtained from coconut oil and glyceride. An emollient considered to belong to the range of oily ingredients – it creates an occlusive layer on the surface of the skin, and thus protects the epidermis against water evaporation and indirectly contributes to maintaining proper hydration level. In addition, it improves product application, by making the product texture more oily, and facilitates the dissolution of other ingredients. It clearly softens the skin. It’s approved for use by organisations certifying natural cosmetics.

Glycerin. Also referred to as trihydric alcohol. It affects the texture of cosmetics and prevents them from drying out. Glycerin has very small molecules – that’s why it easily penetrates deep into the epidermis and facilitates the transport of other active substances. Glycerin is not harmful in any way – it is neutral for your skin. It increases skin elasticity, making it smooth. Moisturises the skin thanks to its hygroscopic properties. Improves the appearance of the skin. Accelerates regenerative processes.

Vitis Vinifera Seed Oil – Grape Seed Oil. It is one of the strongest natural antioxidants. Additionally, it is rich in vitamins A and E, i.e. vitamins responsible for making your skin look young. Moreover, it contains high levels of EFAs and minerals such as potassium, phosphorus, calcium, magnesium, boron or iodine. Grape seed oil has a very versatile effect on the epidermis and works on several levels: it has anti-oxidizing properties and is successfully used in anti-ageing cosmetics. It increases skin’s firmness and elasticity, improves the function of sebaceous glands, refreshes the skin and evens out its colour, helping it maintain proper hydration level. It is perfectly absorbed by the epidermis, so it does not leave an oily film after application.

Olea Europaea Husk Oil – Olive Husk Oil. A natural source of squalene, an emollient with a versatile replenishing and protective effect. It has additional regenerating, smoothing and elasticizing properties. Besides, this oil helps keep the skin appropriately hydrated.

Olea Europaea Oil – Olive Oil. A valuable source of vitamins A, B, C, E and F as well as antioxidants. Olive oil shows great conditioning properties and is one of the most versatile ingredients. Among other things, it provides a barrier protecting the skin and replenishes it, at the same time supporting it in the fight against irritation or damage. It soothes and alleviates allergy symptoms – it’s extremely effective in regenerating the skin after dermatological treatments or in people suffering from eczema, AD or psoriasis. Olive oil is a natural antioxidant. It protects the skin against water loss and is especially recommended for use in children and newborns.

Glyceryl Stearate Citrate. A plant-based emulsifier with skin-softening properties. It is also a stabilizer of the cosmetic product’s formula.

Glyceryl Stearate SE. An oily emollient that forms a protective layer on the skin, protecting it against external factors. It is a texture stabilizer.

Cannabis Sativa (Hemp) Seed Oil. One of the most valuable and versatile natural ingredients, i.e. true hemp, keeps gaining in popularity. Oils based on this plant are an invaluable source of EFAs in perfect synergy, and contain a wealth of natural terpenes, flavonoids and phenols. True hemp oil is suitable for all skin types. It is non-comedogenic, but brings strong and radical effects. This oil can be used on damaged and irritated skin. Perfectly restores skin balance.

Orbignya Oleifera (Babassu) Oil – Babassu Nut Oil. Babassu nut oil has the form of butter, with a gentle, very pleasant fragrance and soft texture. The texture of this oil resembles shea butter. It has smoothing and protective properties. Also, it is an excellent, natural emollient, but does not leave a greasy film on the skin.

Ricinus Communis Seed Oil – Castor Oil. One of the oils known in skin and hair care since ancient times. It was used as early as in the times of Ancient Egypt and was considered “miraculous”. It has a replenishing and protective effect and is an excellent base for creating cosmetics, as it adheres to the skin really well. Besides, it softens your hair, skin and nails.

Panthenol. One of the best synthetic substances, which shows strong and effective soothing and regenerating properties, and at the same time accelerates wound healing. It is perfect for all kinds of irritations, as well as allergic conditions, eczema, atopic dermatitis, or skin burnt due to overexposure to sun.

Mangifera Indica Seed Butter – Mango Butter. This butter is pressed from mango seeds and is characterised by extremely high levels of oleic, linoleic and palmitic acids. Mango butter is primarily an emollient – it leaves a quite greasy protective film on the skin, which makes it a perfect skincare product. In addition, it has a soothing and relieving effect and acts as a natural UV filter. Mango butter is also an ideal ingredient for people with dry skin.

Cocos Nucifera Oil – Coconut Oil. The oil that is extracted from the coconut flesh through pressing belongs to the range of oils that do not dry, leaving a clear, greasy film. It is very resistant to external factors and high temperatures. Coconut oil is rich in oleic, lauric, myristic, palmitic and caprylic acids. Since it is a non-drying oil, it is used as an oily emollient that nourishes, strongly replenishes and protects the skin and hair from external factors. Coconut oil is used in dry, sensitive and atopic skincare, because it soothes and eliminates the feeling of tightness.

Allantoin. Allantoin naturally occurs in the roots of certain plants, e.g. beans. It has strong antioxidative properties. Also, it soothes irritation and is incredibly effective in the case of bleeding gums. Plus, it stimulates the healing process of small wounds and has a moisturising effect.

Ascorbic Acid. Vitamin C. A very strong antioxidant that inhibits the process of tyrosinase, which means that it blocks the production of melanin, the natural pigments in the skin, the growth of which is stimulated by UV radiation. A great advantage of using cosmetics based on vitamin C is also the fact that it has a strong anti-inflammatory effect.

Tocopheryl Acetate – Vitamin E. A vitamin crucial for keeping your skin in good condition, especially important for people with dry skin. It is called the vitamin of youth, because it directly influences the ageing process. It supports the transport of nutrients to the skin. And it’s a natural preservative.

Cetyl alcohol. A substance obtained from palmitic acid or palm kernel oil. A greasy emollient and a non-ionic surfactant. It creates a protective film on the surface of the skin, which prevents the evaporation of water from the epidermis, so it has a so-called indirect moisturising effect. In addition, it smooths out and softens the skin, making it silky to the touch.

Cymbopogon Flexuosus Oil – Lemongrass Oil. Often, you can also come across a name cymbopogon citratus oil, which refers to a lush plant growing in India. It has a very strong antibacterial and anti-inflammatory effect. Besides, lemongrass oil is very rich in natural citral, so it has a strong and distinct scent and is sometimes used as a natural fragrance component.

Xanthan Gum – Polysaccharide from Glucose. It serves as a thickening agent and a pH regulator.

Hyaluronate Acid. An excellent ingredient filling wrinkles, strongly moisturising, rejuvenating and adding radiance. Sodium hyaluronate is one of the best skincare ingredients known to us so far. It enhances the skin’s protective barrier. It strongly binds water in the epidermis when used together with emollients.

Citric Acid. Belongs to the group of AHA acids and occurs naturally in nature. It’s a preservative and a pH regulator. Also, it has astringent and brightening properties and has an exfoliating effect on dead skin cells. Citric acid extends the durability of the cosmetic.

A handful of important facts about the ingredients of our Hand Cream with CBD:

Hand Cream with CBD – How to use:

Apply the Hemp Hand Cream to clean and dry hands as needed. Leave it on until absorbed.