You are here: Home » Blog » CBD and depression. Anxiety and cannabinoid supplementation 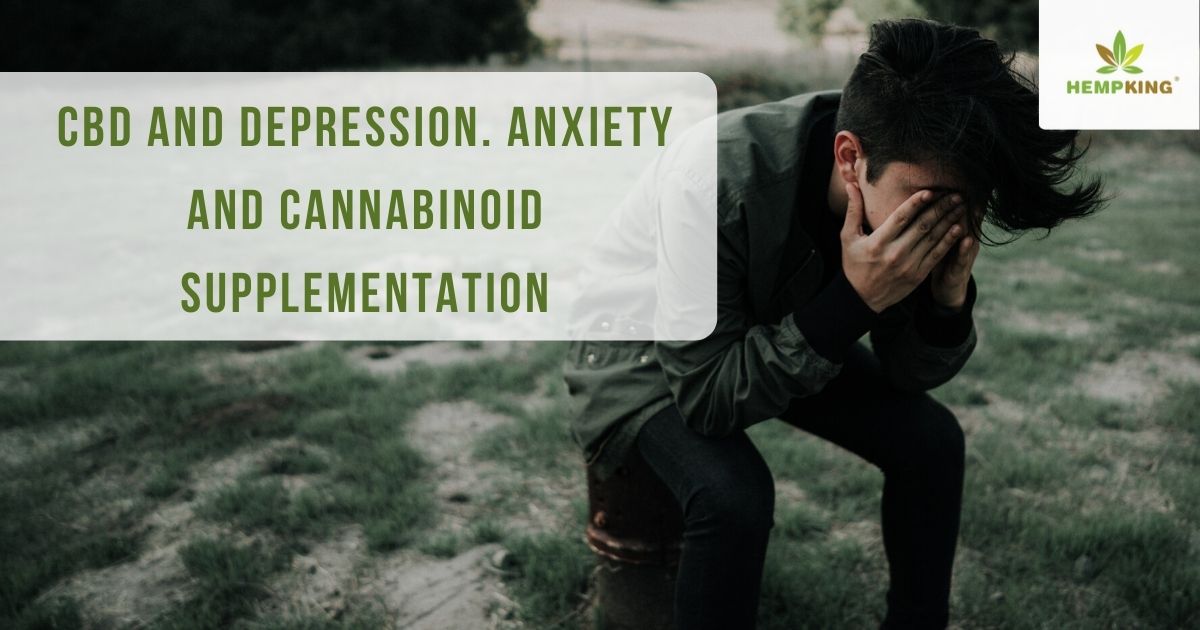 By biodio CBD vs. Psychology 0 Comments

CBD and depression. Anxiety and cannabinoid supplementation. These are two topics that you ask us most often. Today we decided to develop this topic as much as possible. Demanding, full of rush and stress, the times in which we have to function, have been the cause of psychological disorders for a long time. Everyday chase, a lot of demands, challenges, rat races, sometimes problems with adaptation in a demanding society, an inadequately balanced diet, stimulants. This way we are on the path to the most popular civilization disease at the moment. As it turns out, we can fight it naturally and safely. CBD and depression are perfectly connected. Supplementation with cannabinoids can bring relief in anxiety neuroses. Unfortunately, these two diseases have become so common that the growth rate is strikingly large. Although they have been treated as a taboo for a long time, today they are spoken of more clearly. No wonder, because it is estimated that every fourth person in the world is affected by the problem of mental disorders such as neurosis, anxiety, depression or social phobias.

Unfortunately, that are the facts and we can not discuss them, but we can directly influence them. How? By using the right supplementation and changing your lifestyle – sounds like a challenge? Consider this, however, as a peculiar path to a happy life away from all these ailments.

CBD and depression – What are the symptoms of depression and anxiety neurosis?

The topic of depression should be started from the very beginning. Observation of one’s self and one’s well-being is very important here. Depression and anxiety neurosis give a wide variety of signals about your presence. The ability to properly recognize the symptoms of depression or anxiety neurosis is the first and basic action. It often turns out that the first symptoms can help in the fight against the disease and the later we recognize them and properly name them, the greater the probability of deepening the problem. Unfortunately, both depression and anxiety are progressive diseases. That means if left untreated, neglected or displaced, they lead to darker moods, loss of consciousness, and sometimes even suicides. That’s why before we tell you about cannabinoid supplementation, which is an excellent weapon in the fight against depression and anxiety for your health and safety. We will present what are the main symptoms of these disorders.

CBD and depression – How does it manifest itself?

How does anxiety neurosis manifest itself?

Note how symptoms of depression and anxiety neurosis differ from each other. Depression affects our general well-being, often, in addition to abandoning activity, does not give any physical symptoms. Neurosis, on the other hand, focuses its actions on symptoms closely related to our body. So-called nerve pain is nothing but a clear signal of our body that something disturbing happens in the psyche. Unfortunately, problems of general body disorder such as back pains or headaches are not completely equated with neurotic seizures. Many cases are treated improperly or not at all. This is a short way to sharpen this problem. Therefore, we hope that after our article you will be observing changes in your body with greater awareness.

The role of cannabinoids in the treatment of depression.

CBD and CBG and depression and anxiety neurosis.

CBD and CBG, which are one of the many cannabinoids found in medical marijuana.  Are also subject to constant scientific research. Many publications, as well as facts, were born at the moment of observation of supplementation with these cannabinoids in people struggling with depression and anxiety neurosis. What really surprised scientists is the fact that CBD and CBG supplementation works much faster on patients than traditional anti-depressants. But let’s get back to the very beginning. How is it possible that these two components directly affect such a serious problem as depression? Studies conducted on OBX mice clearly indicated that injection of CBD causes almost immediate suppression of disease symptoms. It activates 5 HT1 receptors and causes a reduction in the so-called neurogenesis. It gave them the basis to claim that it can be one of the most effective antidepressants in the world!

Scientific research has gone a bit further. Finally it has been proven that cannabinoids regulate the level of serotonin in a natural, but very effective way. Why is this happening? Because our endocannabinoid system is very strongly connected with serotonin – hence the excellent impact on this key hormone, which is the key to well-being. Many years of research clearly showed that hemp oil supplementation works equally and effectively (and sometimes even more) than antidepressant pills.

But how is anxiety neurosis, which gives completely different symptoms of the disease? CBD has, above all, a very strong sedative effect. In the case of neurotic disorders it is a main feature. CBD oil administered during a panic attack or during the occurrence of physical neurotic symptoms is a much better, faster and safer way to fight than chemical drugs. Today, CBD and CBG are used to treat neurotic disorders such as panic attacks, obsessive-compulsive disorders, social phobias, in the case of post-traumatic stress, and neuromuscular disorders. It is assumed today that regular supplementation with cannabionoids CBD and CBG is able to completely mute the body and reduce the number of attacks to a minimum.

How do I start supplementing with cannabinoids?

First of all, you need to properly recognize your symptoms. Than choose the right concentration of essential oil for yourself. Start at the lowest and observe your well-being.

In the case of cannabinoid treatments, regularity is also very important. Try to follow the dosing, because regularity determine the speed and the effectiveness of supplementation. If you observe good results, you can stay at the lowest concentration. When it turns out to be insufficient, you can easily increase it. With any doubts – remember that we are here for you. Our many years of experience will allow us to choose the right oil for you, as well as help you recognize symptoms.

Check out our article: Methods of taking CBD oil. How to choose the right form and dose for cannabidiol?