You are here: Home » Blog » How does hemp affect the climate? 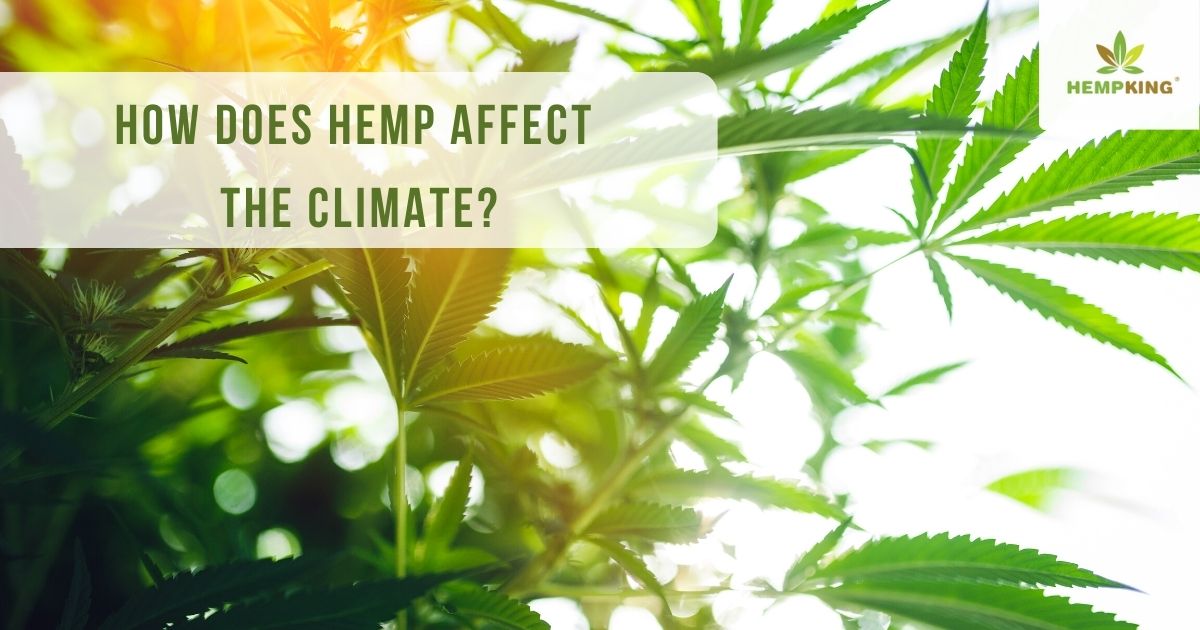 How does hemp affect the climate?

The environmental impact of hemp plants can be divided into 2 stages. The first is cultivation, which in the case of industrial hemp has a positive impact on the planet’s environment. And the other is the production of various kinds of products and their use. Regardless of the stage – hemp has a positive environmental impact in terms of CO2 emissions, biodegradability and many other aspects. The article takes a closer look at how hemp affects the climate.

Hemp cultivation is usually undemanding and eco-friendly. Hemp plants grow very fast (a hectare of crops can yield up to about 10 tons of woody core every few months), while not needing much water to grow. Their root system goes deep enough that they supplement their water requirements from groundwater. Consequently, they do not cause desertification of the land around the crops. Another benefit of growing hemp for the natural environment is that it repels a variety of pests, making it unnecessary to use chemical pesticides. The direct environmental benefit of growing hemp is that it fertilizes the soil and purifies it by absorbing heavy metals.

Hemp products and their impact on climate and the environment

The second stage important in considering the climate impact of hemp is the plant’s potential enabling the production of a variety of end products from it. And also, how they will impact the environment. Taking this into consideration, we have divided hemp products into the following categories:

The production of hemp food products such as flour, hemp protein, pasta, etc. does not require any special chemical processes that could pollute the environment. The only way it impacts the environment is through the release of CO2 into the atmosphere during their production, but the amount of carbon dioxide absorbed by the plant during growth greatly offsets this, which is why hemp-based food products still have a lower carbon footprint than their corn, wheat or soy counterparts. When it comes to cosmetics, a lot depends on the other ingredients in them besides hemp oil. Very often you can come across products with hemp oil, which also contain ingredients derived from petroleum. However, the production of hemp oil itself has no negative impact on the environment.

Another group of products, textiles, are produced in a fairly simple way that does not require the use of environmentally hazardous chemicals. Hemp paper production is also a much greener alternative to products made from wood. First, one hectare of hemp yields the amount of hemp mass comparable to the amount of wood one can obtain from about four hectares of forest. In addition, it is not bleached with toxic chlorine, but with eco-friendly hydrogen peroxide. However, the case is slightly different in the case of hemp bioplastic. Here, acids are used to convert the plant into plastic to extract as much cellulose from it as possible – then the cellulose is soaked in chemical solutions to get rid of the acid. This process is certainly not indifferent to the environment, but compared to the production of conventional plastic, it is still much less harmful. Most products made from hemp are 100% biodegradable – i.e. non-toxic to humans and animals.

When considering the climate impact of hemp, the question of how much carbon dioxide the plant absorbs as it grows is a crucial one. One hectare of hemp field absorbs as much as 15 tons of CO2 from the atmosphere in a year, which is the same amount that a hectare of tropical forest absorbs within that time. This ability to absorb large amounts of carbon dioxide means that most products made from hemp have a zero, or even negative, carbon footprint. At the moment we do not know of any other plant with such a versatile use, which at the same time absorbs as much CO2 as hemp. Given this fact, the widespread use of hemp in industry and increasing the amount of crops grown around the world could greatly reduce the amount of CO2 in our atmosphere.

Several types of fuel can be produced from hemp, including:

Biodiesel or bioethanol can be used to power combustion engines, whether in cars or aircraft. They are also suitable for combustion machinery used in industry. Using hemp briquette for fuel will provide you with much more energy than wood briquette. Plus, it’s cheaper to produce, and hemp grows faster, at the same time absorbing more CO2 than trees. Biogas can replace natural gas and can also be used to heat buildings or produce electricity. The production of each fuel varies. However, each of these processes has much less negative environmental impact compared to fossil fuels. In addition, burning biofuels releases about 80% less carbon dioxide into the atmosphere, compared to fossil fuels.

Hemp eco-building as a way to fight for climate protection

Building with hempcrete has a number of advantages. In addition to their extremely high thermal insulation ratings, resistance to fungi and mould, or the ability to transport moisture to the outside, hemp buildings are also extremely eco-friendly. Mainly because of the production of the building material. Hemp concrete is formed from hemp woody core and lime. Woody core production has a negative carbon footprint. Because of hemp’s previously mentioned ability to absorb CO2. Lime, on the other hand, takes decades to carbonate. It involves a chemical reaction between water and carbon dioxide, so that CO2 from the air binds to the lime and the concrete becomes harder and harder. Consequently, building with hempcrete not only minimises the carbon footprint of the building, but also saves a lot of energy for heating (or cooling) the rooms thanks to its high thermal performance. And as we all know – the more passive a building, the smaller its carbon footprint and a destructive impact a household has on the climate.

Marijuana cultivation as a climate burden?

When considering the impact of hemp on the climate, we must not forget that hemp is not only about industrial varieties of Cannabis Sativa L. used in the production of various goods. Growing cannabis, which contains more than 1% THC and is used for medical or recreational purposes, looks very different from growing true hemp. Cannabis Indica is a bit more demanding in terms of growing conditions, but this is not the only reason why its production is a burden on the climate.

Researchers at the University of Colorado (where recreational marijuana use has been legal since 2012) studied the environmental impact of hemp crops. It turned out that keeping plants in closed halls results in very high energy consumption by heating, ventilation and air conditioning systems. Depending on the state and its climate, the carbon footprint of a kilogram of dried marijuana produced ranges from 2.5 to 5.7 tons of CO2. By way of comparison, this is about 30% more than the coal mining industry produces. A change in cannabis cultivation laws allowing outdoor cultivation could change that. It’s very important that other states or countries considering the legalization of cannabis cultivation take this aspect into account when establishing new laws, and that companies growing cannabis in green house systems choose the most environmentally friendly technologies.

Hemp protein is a valuable vegetable protein which has gained great popularity among vegetarians and enthusiasts of healthy eating.... read more

Dry hemp is one of the products in our offer, which we can use in several ways, although this... read more